->We have done lots of problems using this strategy so far, we are just making it more formal.
•Remember to use distributive property on a negative grouping, multiply all inside by -1
•EX:

->What happens when we have fractions or decimals in the problems? Well, we can deal with
them as we normally would, or we can use a trick to get rid of them. Here it is:

->Here’s how it works: Fractions
•All you have to do is look at the problem and determine the LCD of all the fractions from
BOTH sides, then multiply both sides of the equations by the LCD (remember we can
multiply both sides of an equation by the same number and we haven’t changed the
equation – mult property of equality)
•This will magically make all the fractions disappear!
•EX: Here is an example where we would have to find the LCD for at least two of these
fractions anyway, so why not just use it early to clear the fractions.

Instead of trying to add the fractions, I’m going to get rid of them – watch! 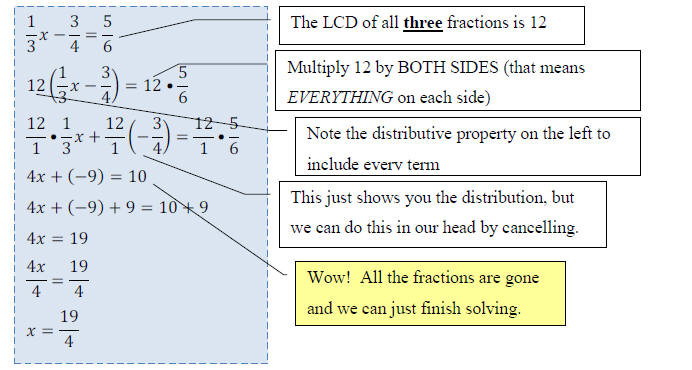 This problem has only one fraction in it, and if I look at it, I
can see that I am never going to have to add the fraction to anything (there are no other
variable terms in the equation). So I can just move my constants together (since they’re
not fractions) by using the addition property of equality. 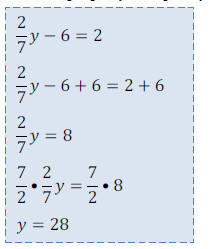 •We don’t need an LCD for decimals, what we need is a power of 10 because for every 10
we multiply times a decimal, the decimal point moves one to the right. We just need to
figure out how many places we have to move the decimal and that tells us which power

NOTE: We didn’t change the problem because we did the same thing to both sides. There is no
need to worry about the decimal point once it is gone!

•NOTE: we have to be VERY CAREFUL here. Remember we are multiplying each
TERM by the LCD. How many terms are on the left side at the beginning? Only one,
because a term is stuff multiplied together and we have ½ multiplied by blob (the stuff in
parentheses). So, when we multiply by the LCD, we only need to multiply by the thing
on the outside of the parentheses because that will eventually get multiplied into the
•parentheses when we distribute (the associative property).
We could have distributed first, then multiplied each term by the LCD (4) and we would
get the same answer. Whichever way you want to do it is fine.
•Sometimes it can look more complicated, but it’s basically the same type of problem.
• EX: 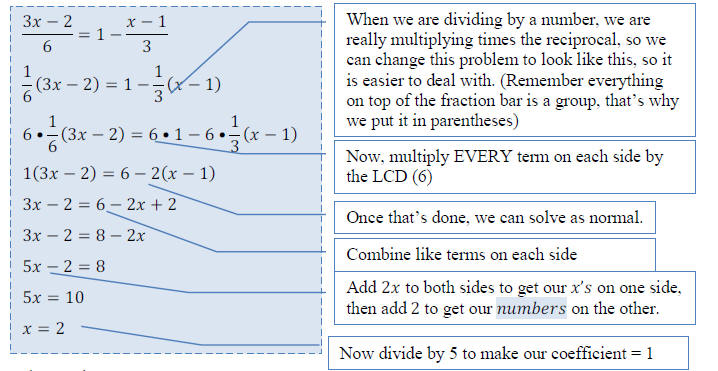 ->Weird stuff that can sometimes happen with equations:
•Sometimes equations can have no solution. We can tell if there are no solutions, if we
end up with a contradictory statement when we are solving. Example:

•Other times the x might go away, and we have a true statement, but the x is gone:

•The above examples are fairly obvious, but sometimes it isn’t easy to see. We can only
find out after we simplify both sides.