1. There are 3 scales used in measuring temperature – Fahrenheit, Celsius and Kelvin. One can
convert Fahrenheit reading to Celsius using

a. I want to convert 100° F to the Kelvin scale. Make the conversion and explain your
process.

d. Generalize this process by creating a function that will take measurements in degrees
Fahrenheit and convert them into degrees Kelvin, and explain how you did that. 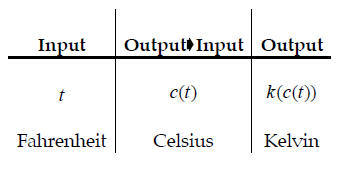 1. In mathematics, combining simple functions with "composition" to form more complicated
functions is somewhat similar to the way that in chemistry elements can be combined
through chemical bonds to form compounds.

2. Function composition combines a pair of functions f and g into a single "composite"
function written f o g . The composite function operates in a chain where the output of
function g is used as the input of function f.

4. There are three common operations by which two functions f and g can be combined to
form another function h: addition ( f + g) , multiplication ( f * g) , and composition f o g .
The three are quite different, and function composition needs to be clearly distinguished
from the other two.

6. Iteration (repeating a process over and over) can be expressed in terms of the composition
of a function with itself.