Two matrices are said to be equal if they have the same size and their corresponding
elements are equal. For example,

Two matrices A and B of the same size can be added or subtracted to produce a matrix of
the same size. This is done by adding or subtracting the corresponding elements in the two
matrices. For example,

A matrix A may be multiplied by a real number called a scalar in the context of matrix
algebra. The scalar product, denoted by cA, is a matrix obtained by multiplying each entry of A
by c. For example,

With certain restrictions, one matrix may be multiplied by another matrix. The following
problem will help define matrix multiplication.

On a certain day Maria's Optical sold 32 frames, 30 poly-carbonate lenses, and 2
no-line bifocal lenses. If the prices for these goods on that day were $50 for
frames, $65 for poly-carbonate lenses, and $45 for no-line bifocal lenses, find the
total revenue for Maria's Optical for that day. The day's sale of goods may be
represented by a matrix:
A = [32 30 2].

The sale prices for that day may be represented by another matrix:

The first element in matrix A gives the number of frames sold and the first
element in matrix B gives the selling price for each frame. Their product
32 · 50 yields the revenue from sold fames for the day. A similar interpretation of
the second and third elements in the two matrices suggests that multiplying the
corresponding elements will obtain the respective revenues gained from the sale
of each product. Adding each of these sub-products would yield the total revenue
obtained from the sale of goods that day. Thus, multiplying the elements of matrix
A by the corresponding element in matrix B and adding the products yields a
single number result representing the total revenue of the shop: 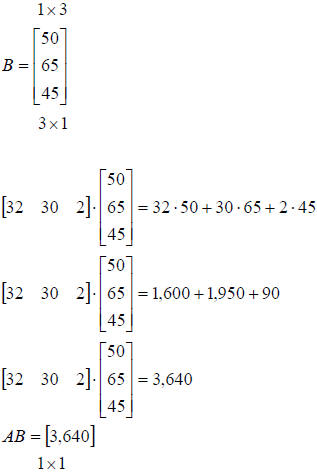 In less general terms, the following example will illustrate the mechanics of matrix
multiplication.

The remaining elements are found accordingly. 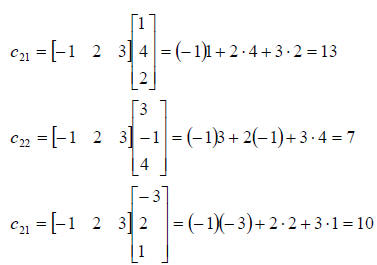 Thus, the matrix product AB is

As mentioned above, in general, AB ≠ BA for matrices A and B, so the commutative
property does not hold for matrix multiplication. However, the associative and distributive
properties are valid. So, (AB)C = A(BC) and A(B+C) = AB + AC.

The identity matrix has the property that

for any
s × n matrix B. In particular, if A is a square matrix of dimension n × n , then

Multiply each element of A by six.

The sum of two matrices is the matrix whose elements are sums of the corresponding elements in
the addends.

The difference of two matrices is the sum of the minuend and the product of –1 and the
subtrahend. 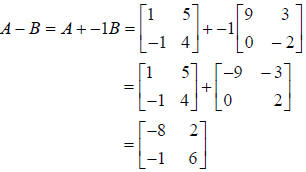 If GH is defined, then H must have as many rows as G has columns. The product will have as
many rows as G and as many columns as H. Since G is a 3×2 and H is a 2×4, the product GH is
defined as a 3×4 matrix. 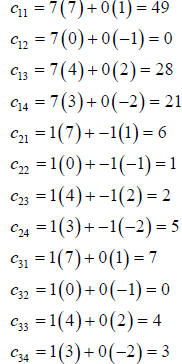 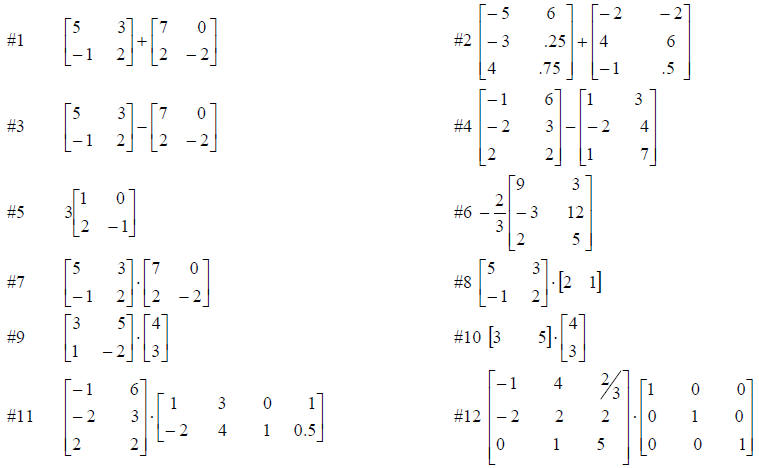 #13 Show with one example that multiplication of matrices is not commutative.

For the problems below refer to the following matrices.