A rational function is the quotient of two polynomial functions, where the denominator is
not zero:

1. Find the equations of the vertical asymptotes and the domains of each of
the following functions.

II. The horizontal asymptote is a line which the graph of the function approaches, but
never touches as x gets very large or very small, i.e., as

. The
graph may cross the horizontal asymptote for some real value of x. The equation of
the horizontal asymptote will always be of the form y = b. Since we are examining
the function as x gets large without bound, the terms of greatest importance are
those with the largest exponent in both the numerator and denominator. There are
three cases to be considered.

(found by
considering only the highest degree term in numerator and
denominator). It reduces to

. As x gets large without
bound, the fraction gets smaller and smaller and approaches
0. Thus the equation of the asymptote is y = 0.

. Since the
x2 terms will cancel, the horizontal asymptote is y = 3.

B. Referring to the function in IIB, we found the horizontal asymptote to be
y = 3. Can f(x) ever equal 3? If

III. In some cases there is a “hole” in the graph. This happens when there is a factor
which cancels out of the numerator and denominator.

There will be a hole (but not an asymptote) at x=4. To find the
corresponding y-value, substitute 4 in place of x in the reduced form of the
function. In this example, there is a hole at the point

3. Find the coordinates of the hole in the graph of

IV. If the degree of the numerator is greater than the degree of the denominator,
then there will be an oblique (or slant) asymptote instead of a horizontal
asymptote. To find the equation of the oblique asymptote, use long division as
follows. (could use synthetic division)

Subtract and bring down -3 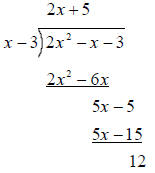 4. Find the equation of the oblique asymptote.

V. Find the y-intercept, let x=0. Some functions may not have a y-intercept. No
function will ever have more than one y-intercept, since this would cause it tot fail the
vertical line test for a function.

5. Find the y-intercept of each of the following functions.

VI. To find the x-intercept, let y = 0. The only way a fraction can equal zero is if its
numerator equals 0, but its denominator does not. A function may have 0, 1, or
more x-intercepts.

. Make sure that
neither of these values causes the denominator to = 0. The x-intercepts are (-1, 0),
and

6. Find the x-intercepts of each of the following functions.