• Here are some areas of standard geometric figures that you should remember:

• The volume of a right figure is is V = A × h, where h is the height of the figure, and A is
the area of the base. If the base is a circle, then we’re talking about a right cylinder and
A = πR2. If the base is a rectangle, you get the idea.

• Solving a system of 2 equations with 2 unknowns: if

(where the Ai's, etc., are constants) then you can “solve” the first equation for x like x =
(C1 − B1y)/A1 and insert this expression into the second equation. Then you will have a
solution for y. Once you know y, you can use this value for y to solve for x.

• In the figure, the trigonometric functions sine, cosine, and tangent acting on the angle θ are
defined as follows

• A consequence of Pythagoras’ theorem is that sin2θ + cos2θ = 1
• These are some useful values of the trig functions you should remember I reminded you of,
but I will generally put these on exams for you:

• Radian vs. Degree Measure of Angles: In the figure above, if c = 1, then the circle drawn is
called the unit circle. The relationship between the length s of a piece of arc and the radius
R and angle of arc θ is s = Rθ. When this relation is applied to the unit circle, we see that
the angle θ=1 revolution has to be measured in a very particular way: in “radians”. One
revolution = 360◦ = 2π “radians”. 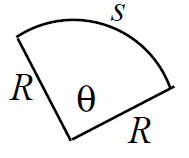 • You should convince yourself that you understand the graphs below. I don’t expect you to to
memorize them, but they should make sense if you look at the particular values of the sines
and cosines listed above (when degrees are converted to radians).

• A function maps each possible value of an independent variable t to a value of the dependent
variable x. We write x = f(t), or equivalently x = x(t). 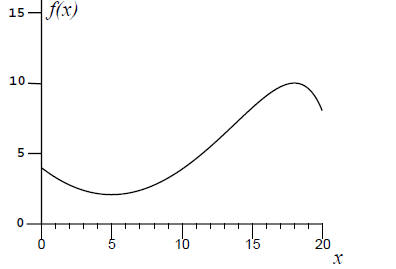 , which is called the indefinite
integral.
• The definite integral of a function f(t) from t1 to t2 is

where F(t) is an antiderivative of f(t). The definite integral gives the area under the function
between the limits of integration (t1 and t2).

• For some common functions: